Georg Schilling v. Canstatt, Grand Bailiff of the Sovereign Military and Hospitaller Order of St. John of Jerusalem, Rhodes and Malta, (* about 1490 in Neuffen, † 2nd February 1554 at Heitersheim Castle). 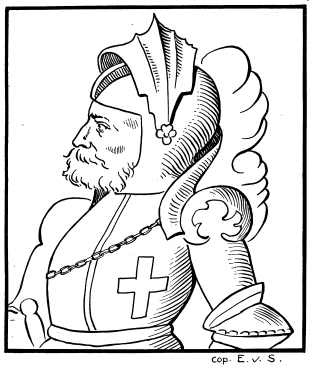 Sch. v. C. came from an old Swabian family of Hohenstaufen ministry officials. His father served the Count of Württemberg. Sch. v. C. joined the Order at the age of about 14 years. Contrary to conflicting opinions in literature, entry into the Order at this age was an exception. Sch. v. C. is first mentioned in a letter written by Georg von Hirschfeld, who was a friend of Luther's and went on a pilgrimage to the Holy Tomb in 1517 and was accompanied as far as Rhodes by a »Jorge Schilling«.

In view of the Turkish threat to Rhodes, Sch. v. C. had been conscripted for military service. He distinguished himself greatly in the fighting associated with the great siege of Rhodes by the Turks in 1522. His experiences at this time left such a great impression on him that he later had a mural painted at his Commanderie of Heitersheim, showing a map of Rhodes and the events of the war.

In the years after the siege, he was successively given the Commanderies of Sulz, Dorlisheim, Überlingen, Bubikon, Hall and Mergentheim.

When the Order lost its home with the fall of Rhodes, Charles V. offered Malta to the Order as a fief. So in 1524, an eight-man Order Commission was sent from Viterbo to Malta. On this Commission, Sch. v. C. represented the langue of Germany. The decision of the General Convent to accept Malta as the new seat of the Order in 1527 is generally attributed to the influence of Sch. v. C., whose prestige in the Order finally proved greater that the strong resistance of the French langues (Auvergne, France, Provence) to the choice of Malta.

On 13th April 1534, Sch. v. C. became Grand Bailiff, i.e. head of the German langue of the Order. In 1535, he had to return to the military field again, taking part in the campaign against Chair-ed-Din Barbarossa under Charles V. In the course of this enterprise which was a great success for the Christians, Sch. v. C. took Tunis with his troops, where about 20,000 Christian slaves were freed. Other military operations followed and kept Sch. v. C. in the Mediterranean region. The part he played in the various caravans against the freebooters along the Barbary coast made him known as one of the best commanders in the Order. 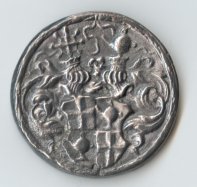 From 1535 to 1537, he took on the post of the Governor of Tripoli. Whilst holding this difficult office, he pointed out at an early date that it would be a great problem to hold the fortress in the face of a serious attack. Years later, this assessment proved to be all too correct. In March 1541, he was appointed as Captain-General of the galleys, and in this position, Sch. v. C. succeeded in capturing Ibrahim, the father of the pirate Kust Ali Abdul Rahaman. It was in exchange for Ibrahim that the subsequent Grand Master Jean Parisot de la Valette was released. But Sch. v. C. did not only achieve military success.

As an outstanding diplomat, he cleverly represented the interests of the Order on numerous occasions.

In 1546, Sch. v. C. returned to Germany and, after extensive negotiations relating to the commanderies for which he was to be responsible, became Grand Prior of the Grand Priory of Germany, with his seat in Heitersheim.

At the Imperial Diet in Augsburg in 1548, Sch. v. C. was awarded the rare title of an Imperial Prince in the presence of all the princes of the realm. A portrait medal bears witness to this event, of which the only cast is today to be found in the State Coin Collection in Munich. The title of Imperial Prince was passed on to the 22 succeeding Grand Priors of the langue of Germany.

Sch. v. C. died on 2nd February 1554. There is no record of whether he died at Heitersheim Castle or on one of his visits to Malta neither does he have any known tomb. But this has not detracted from the memory of one of the leading German Order Knights.