A Poet with Hammer and Chisel

The art of monuments had its heyday in the 19th century. One of its major representatives was the sculptor Johannes Schilling from Dresden, who has almost been forgotten today.

On the "balcony of Europe", the Brühl Terrace in Dresden, there is again a throng of tourists from all over the world, after the fall of the Iron Curtain. One group gathers round a special tour guide, lna Nickel. Her great-grandfather, Johannes Schilling (1828 to 1910), sculpted the expressive "Four Seasons" groups by the terrace steps. 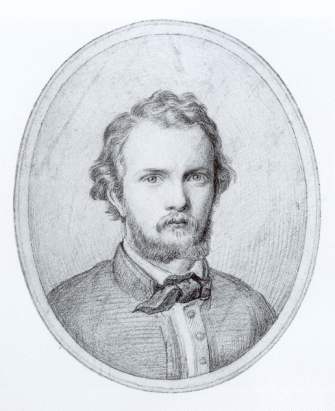 The visitors standing around the sculptor's great-granddaughter enjoy with particular reverence the marvellous view of the River Elbe, the Court Church and the City Castle, which has now been almost completely restored. They are all Schillings, who have come to their family reunion in the city on the Elbe from all of the continents. Later, they admire other highlights of European city architecture – the Theatre Square with the Semper Opera House and the Zwinger. But there is one thing they find depressing. Whereas other artists, like the designer of the Zwinger, Daniel Pöppelmann, or the architect of the Court Theatre, Gottfried Semper, are praised in every brochure, there is hardly a mention of Schilling, although the "Four Seasons" was certainly not his only work. He created a number of other monuments in this "Florence on the Elbe", including the monument to King Johann in Theatre Square and the panther quadriga on the legendary Semper Opera.

The art historian Bärbel Stephan puts it in a nutshell: "These works of art have been loved, admired and preserved ever since they were completed, but their creator has been forgotten."

In a lengthy book which has recently been published, Bärbel Stephan, who works for the Dresden State Art Collections, commemorates this outstanding artist (Bärbel Stephan, Sächsische Baukunst. Johannes Schilling. Verlag für Bauwesen, Berlin. 306 pages, 205 illustrations, mostly in colour. Price: 198 DM). She paints a vivid portrait of the man who won the competition to sculpt the terrace groups at the age of 32 years. With this "stroke of genius", he instantaneously won a place among leading German sculptors. At the Dresden Academy of Art, he was the favourite student and long-time colleague of Professor Julius Hähnel, who called him with admiration "divine Schilling". Schilling's 265 sculptures can be seen in many towns in Germany as well as in Austria, Italy and France. One of his most famous but also most controversial constructions is the Niederwald Monument near Rüdesheim. 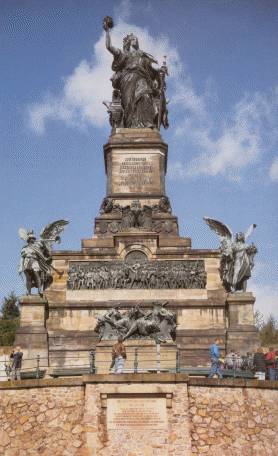 This mighty work is said to be martial and has thus damaged the sculptor's reputation. But, actually, Schilling only wanted to glorify peace after the end of the Franco-German war. For example, Germania's sword is not drawn, unlike that of Hermann in the Teutoburg Forest, but is in a resting position. Schilling was annoyed when he was asked to position the national monument so that Germania looked towards France. In October 1876, he wrote to County Administrator Fonck in Rüdesheim: "Why should Germania look from Niederwald towards France, now that the Rhine is no longer the boundary river? It is not to the conquered enemy but to the German people that she is showing the crown destined to be placed on her head. That is why she is looking towards the Rheingau. It is my absolute conviction that the monument must not be seen as anything other than representing an established fact. The war is over..., Germania is the victor."

Schilling finally had his way. But this does not alter the fact that sculptors of monuments in Germany, after enjoying a heyday in the 19th century, have had little regard since the First World War. Their names are to be found, if at all, in tiny lettering on the base of their works of arts. Visitors can usually only decipher them after applying a scrubbing brush. Bärbel Stephan has contributed to rescuing one of these artists from oblivion. In her book, which is simultaneously an admirable work on Dresden, she writes on the unique collaboration of Semper and Schilling: "Whereas Semper was a poet in architecture, Schilling created his sculptures in a style corresponding with this architecture, with the landscape – they are legible, comprehensible, true to scale, beautifully flowing in their outlines, exact in construction, have polished portraying power and yet are finally so poetic."