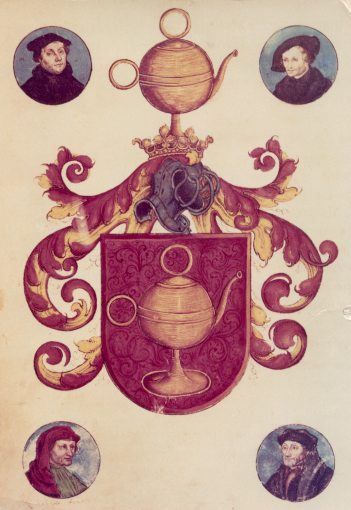 One of our ancestors, from whom all the Schillings alive today are descended, was Hans Ulrich II Schilling von Canstatt, Erbschenk in Swabia since 1260, master of Owen and Wielandstein, Burgrave of Tübingen, doctor juris (Tübingen) and born in 1485 according to family history. In 1522, he married Anna Speth von Sulzburg, whose parents were friends of Melanchthon, who had also studied in Tübingen. Ulrich probably knew him even then, although Melanchthon was 12 years younger.

According to Stupperich Vol. VII, 2, 1975, p.62, Ulrich was godfather to Melanchthon's second son, Georg, in 1527. He had been registered at Wittenberg University since the summer of 1527 and was Rector of the university in the winter of 1531/32.

In 1974, a register sheet from the University of Wittenberg was shown at an exhibition in Basle and is now in Halle with other records from this university.

The sheet was painted by Lukas Cranach the Elder. It shows a large version of our coat-of-arms - the gold wine jug in a red panel, framed by 4 small medallions with little pictures of Dr. Martin Luther (top left), Melanchthon (top right), Agricola (bottom left) and Erasmus of Rotterdam (bottom right), with Ulrich Schilling von Canstatt, Dr.juris and rector magnificus, and the date 1532 underneath (not visible here).

The historic and geographical encyclopaedia of Jakob Christof Iselin, published by Brandmüller, Vol.4., in Basle in 1717, also names Ulrich as rector magnificus in Wittenberg in 1531, as does the Great Complete Universal Encyclopaedia of All Sciences and Arts, Vol. 34, published in Halle and Wittenberg in 1742. In the Album Academiae Wittenbergensis by Foerstmann, Vol. 1, published in Leipzig "Anno domini MDXXXII per semestre hybernum", the students who attended his lectures are named.

As far as we know, a university consisted of 4 faculties at that time, namely theology, jurisprudence, medicine and philosophy. The rector was usually elected from these faculties for 1 – 2 years. A teacher was chosen who had been at the university for some time and had proved his ability and was taken from each of the faculties in turn, in the order given above. So Ulrich must have been at the university for at least 5-8 years. Perhaps Melanchthon brought his older colleague to Wittenberg from Southern Germany. He himself had taught at Tübingen since 1514 and was appointed as Professor of Greek in Wittenberg in 1518.

As we know, Melanchthon was later strongly opposed by strict Lutherans because of his inclination towards the Calvinist Holy Communion dogma. This might have been a reason why Ulrich left Wittenberg after 1532, in view of his assumedly close connections with Melanchthon. Another reason might have been that he was called back to his home region, since he owned several estates in Swabia and played a role there, as shown in existing correspondence, when his home was under a significant threat from the Peasants' Revolt. In addition, the town of Tübingen was captured by Spanish troops in 1547. However, together with Herter von Herteneck, the senior steward, he successfully defended the fortress. We do not know exactly when Ulrich became a Protestant. It looks as if he did not finally take this step until after 1540. But there is no doubt that he had had great sympathies for Lutheranism since his time in Wittenberg, as is also shown in Duke Ulrich's letters. He died in 1552.