Please click on the image below to see a large version (will open in a separate window). 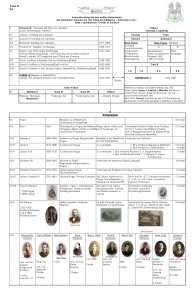 Hanß IV’s son Kilian I (1512 to 1561) was the ancestor of the Kilianides. They founded various lines in Saxony (for instance the Pegau line and the Lauchhammer line) and Grünfließ/Posen.

In 1773 the great grandson of his twelfth child Andreas II, Jakob Friedrich III (1754 to 1840) who lived in Hamburg-Altona, belonging to Denmark at this time, joined the Royal Danish Army holding the rank of “Generalfeldzeugmeister”. He founded the Norwegian line which is still prospering. For safety reasons the photocopy of the family tree, twelve metres in length, was stored in Norway during World War II until Ernst Schilling brought it back in 1950. Now it is kept in the family archive in Düsseldorf.

Back to Jost, the donor of the Stanislaus Altar in Wissembourg. One of his elder brothers, Matthias (around 1450 to 1545) also moved to Krakow and later to Thorn and Danzig (Danzig line). He was a famous medallist.

His daughter Anna Barbara Schilling is said to have been Nikolaus Kopernikus’ mistress, which seems quite unlikely, because the famous mathematician and astronomer’s alleged housekeeper and mistress was presumably married with children. Eventually she cannot have been Matthias’ daughter, perhaps she was one of his daughters-in-law.